Sheridan College has operated several dinosaur quarries over the last two decades. Originally a teaching site showing bone fragments eroding out of the sandstone, the discovery of teeth in 1994 began excavation at what is now known as the Allosaurus Site.  In addition to the nearly complete skull,  a “toe,” scapula and femur have been discovered. The bones have been well cared for and have been available for tours in the Sheridan College Science Museum.  Sheridan College has named this dinosaur “Caesar”. 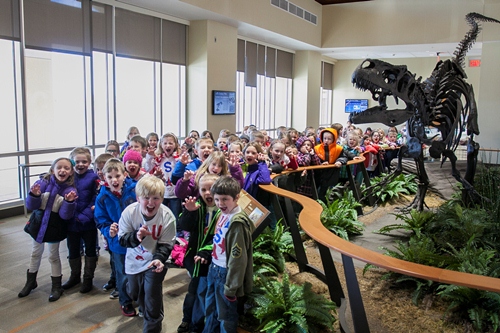 The Edward A. Whitney Academic Center provides a beautiful venue for the mounted replica of an Allosaurus with a separate mount of Caesar’s fossil skull. An educational placard explains the history of the Allosaurus and our own Caesar for all visitors to Sheridan College.

The full replica of Caesar and Caesar’s skull have been unveiled and are available for visitors and class tours on the second floor of the Edward A. Whitney Academic Center. We would like to thank First Federal Savings Bank, the David B. Jones Foundation, the S.K. Johnston Family Fund, the Nickerson Family Foundation, Lee Davis and many, many other donors whose generosity gave Caesar a home. 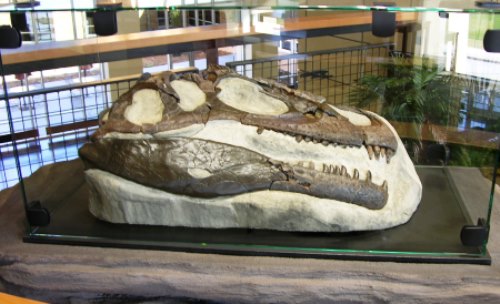