The Winding Road to Success – the Josh Keegan story 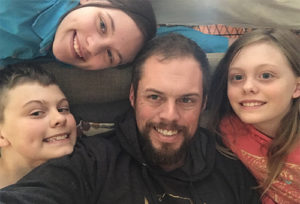 Growing up, neither of my parents were college graduates. Most of my friends and family also had not gone to college. There was a low priority placed on education, viewed more like a luxury item, and it was more important to get a job and learn hard work at an early age. Towards the end of my high school career, where I was admittedly an awful student, my dad informed me that he could not afford to pay for me to go to college. In our house, we were not aware of other options to make college possible. Higher education became an afterthought, and I went to work.

In the late 2000’s I took my children to decorate gingerbread houses in the basement of the Buffalo movie theater. I had seen the sign for Sheridan College in Johnson County, but never gave it much thought. That day, seeing the pictures on the walls and various adornments piqued my curiosity. Over the next couple of years, I would excitedly review the flyers listing the classes offered for the next semester, dreaming that maybe someday I would have the time and money to take a class or two.

Following several career changes, I was in a place where education had great emphasis. Interacting on a daily basis with a variety of MDs or PhDs, those I once saw as mythical titans of wisdom, I now realized were just people. They too had worked hard, but in a different direction than I had taken. I finally had the opportunity and motivation to start taking classes. The means would come through several community-based scholarships. Sheridan College truly strives to give the opportunity of an education to everyone who’s willing to work hard to earn it. Along the way, I became more aware of why Nelson Mandela said, “Education is the most powerful weapon you can use to change the world.”

When I started taking classes at this college, I had no idea how life-changing it would be. Receiving my acceptance into the Nursing program here at Sheridan College felt like the completion of a dream. Little did I know that the real work was about to begin!