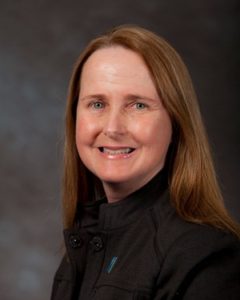 From Sheridan College nursing student and instructor to flight nurse

When selected as the SC 2011 Distinguished Alum Robin said that,

“I am shocked and surprised. It’s an honor. I feel like I’m just an average person who has opened my own doors.”

Robin made the tough decision to leave the Sheridan Community last year to be a caregiver to her young grandson whose mother was deployed, and to help with care for her ailing mother-in- law. The move to Cheyenne enabled Robin to begin a new career as an advanced practice nurse with the privilege of diagnosing illness and prescribing medications.

Robin draws upon her more than thirty years of experience in health care to provide primary care to patients across the life span in a very busy clinic in the Cheyenne community. She continues to volunteer her time at the Free Clinic there. As a flight nurse in the Wyoming Air National Guard, Robin served our country in times of disaster. She deployed to provide support during Operations of Enduring Freedom and Iraqi Freedom and continues to serve as the Officer in Charge, working in Infection Control.

Robin received accommodations in 2008 and 2010 for her work with the Guard. Robin was nominated by Jenny Heuck, SC Nursing Instructor, “because she is a highly skilled health care professional whose career represents her commitment to life-long learning and her dedication to the provision of high quality nursing care. She has been a presence at Sheridan College as a student and an instructor. She has volunteered in the community at the Free Clinic and serves in the Wyoming Air National Guard as a flight nurse.

Robin taught full time while raising two sons, going to school for a bachelor’s degree and both of her master’s degrees – truly an embodiment of the Sheridan College motto to “Never Stop Learning.” Debi Isakson, Alumni Coordinator at Sheridan College said, “Robin is an excellent role-model for our students at Sheridan College. She demonstrates a sincere passion to continue learning and giving back to her community – or in Robin’s case her Country.”