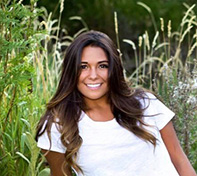 For Rebecca “Beck” Bridger, attending a community college in her hometown of Sheridan, WY was the first step toward her dream of a musical performance career in Los Angeles.

Beck was born in Casper and adopted by her Sheridan parents when she was only weeks old. She was raised locally, and loved growing up in a close-knit community.

Ever since she was a little girl, Beck’s dream was to become a professional singer. “I’ve been performing my entire life, but right now my heart is tugging at becoming a creative artist,” she said, currently studying at the American Musical and Dramatic Academy College & Conservatory of the Performing Arts in Los Angeles.

“I loved the idea of getting my general requirements out of the way while I was still deciding which path I wanted to follow for the next few years,” Beck says. “The one-on-one instruction I had at Sheridan College taught me how to communicate with teachers and authority figures in my everyday life.” At Sheridan College, she learned to be assertive and focused in class—and that matters at the AMDA. It was great preparation for life in the larger Los Angeles music world.

“I want to create and produce my own music, and perform it around the world,” Beck says. “People want to hear authentic music that reflects you and your own story. As an artist, it’s my job to create music that allows people to feel—artists want to shine a light on what is going on in the world, inspiring and allowing people to feel a certain way. I plan to do this through the power of music.”

When she graduates from AMDA, Beck hopes to sign with an agency to start auditioning for commercials, television, film and musical roles.

“I plan to come back to Sheridan someday in the future and bring back everything I’ve learned,” Beck says. “Attending SC was the right choice for me, because I wasn’t ready to make the jump of leaving home quite yet. With the help of Sheridan College, I am now living in L.A. and I love it!”