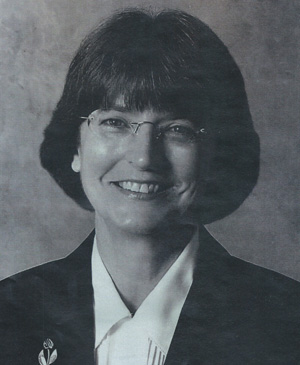 Dr. Patricia Garber Mahon was nominated by Judy Garber for the 2006 Sheridan College Distinguished Alum. Dr. Mahon graduated from Sheridan College in 1974 and continued her education at Montana State University – Billings where she completed both a Bachelor’s and Master’s degree. Her PhD is from Kansas State University. Currently (December 2005) Dr. Mahon is Vice-President for Student Affairs and Dean of Students at South Dakota School of Mines and Technology and in 2005 was named one of Rapid City’s “Woman of Distinction” for her achievement and leadership in facilitating student services in higher education.

“Pat is a strong advocate for the students; she has excellent skills in student services management, outstanding interpersonal skills and exceptional interest, enthusiasm and intelligence” said Judy Garber who nominated her as the 2006 Sheridan College Distinguished Alum.

In 2005, Dr. Mahon was involved in and developed two successful grants for the students at South Dakota School of Mines: one for staffing and resources for Alcohol education and prevention and the other for a counselor position for Suicide awareness and prevention efforts.