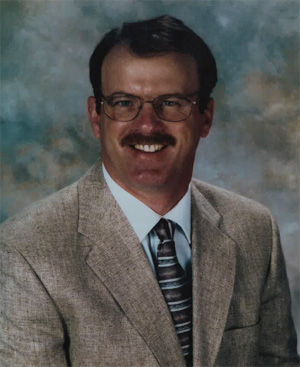 A 1991 graduate of Sheridan College, Dave Hofmeier was elected Sheridan County Sheriff in 1998. Hofmeier is still actively involved in the community. Dave cares about the quality of life in our community, especially for young people, who are our future. Before enrolling in Sheridan College, Dave spent several years in a job that didn’t allow for much of a chance to advance. He was one of the non-traditional students who decided later in life that he needed a college education.

He was Sheridan’s first sheriff to attend the National Sheriffs’ Association Leadership Training. As Sheriff, Dave instilled an attitude of public service in the office, and his officers showed this same attitude.

Hofmeier says his degree in police science from Sheridan College gave him “a true sense of self, an opportunity and even a challenge to do things that might not have been available without it. I am very proud of my education at Sheridan College. I am not saying I would not have run for Sheriff without it, but I am saying that finishing my degree gave me the confidence to step forward and try.”

According to Linda Lawrence, Alumni Officer, “Sheridan College has graduated some extraordinary people – people who have valued the opportunity of their education, excelled in their profession and is dedicated to their communities. Dave Hofmeier is one of these people.”