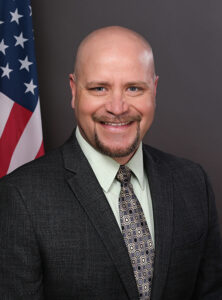 Sheriff Allen J. Thompson ’96 has dedicated his life to serving his country and his community with professionalism and excellence. Sheridan College Criminal Justice Department head Jonni Joyce nominated Thompson for this year’s Distinguished Alum, having worked with him through the Sheridan College Criminal Justice program. Of Thompson, Joyce said that among many other things, “he always answers the call.”

Sheriff Thompson enlisted in the Army immediately following his high school graduation. While serving his country as an infantryman, he received multiple awards and decorations. After his enlistment concluded, he continued his service in the Montana National Guard.

In 1998, Thompson was hired by the Sheridan Police Department and attended the Wyoming State Law Enforcement Academy where he graduated with honors, earning the Academic Excellence Award. He worked as a patrol officer for two years before being promoted to Sergeant.

In 2006, Thompson joined the Sheridan County Sheriff’s Department as a road deputy. He quickly worked his way up the ranks, from deputy to Corporal to Sergeant to Lieutenant, then was named Undersheriff in 2016. The acting Sheriff retired a year later and Thompson was appointed by the County Commissioners to fill his term. He successfully ran for the office of Sheriff in 2018. Twenty-two years after graduating from Sheridan College, Thompson earned the highest position in law enforcement in Sheridan County.

Sheriff Thompson has not forgotten where it all began and has been very active in the Sheridan College community. He has assisted the Police Science program as a guest lecturer and serves on the Sheridan College Criminal Justice Advisory Board. As Sheriff, he has hired Sheridan College students in part-time detention positions while they are working on their degree requirements. He believes this helps the students by providing law enforcement experience on their resumes, making them more competitive in the job market once they graduate.

Sheriff Allen Thompson continues to answer the call: to his Alma Mater, his community and his country. We are proud to have Allen Thompson as our 2021 Distinguished Alum!